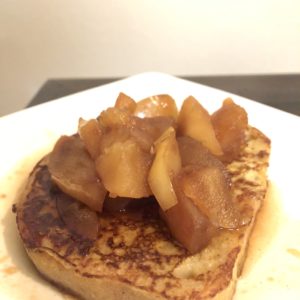 This gluten free French toast recipe was actually something I threw together very last minute this past Sunday (as part of our Easter dinner), and we shamelessly enjoyed it while binge-watching Ozark.  (#sorrynotsorry #quarantinelife #lazySunday) 😀

It was actually intended to be Easter brunch… sorry Michael!  Gotta love breakfast for dinner, though – right?

But hey, life happens.  There are only so many hours in a day!  I practice what I preach, and a big part of what I do is help people incorporate quicker, easier, tasty and balanced meals into their busy lives.  If you think I spend hours and hours in the kitchen slaving away each week, cooking from scratch… think again!

The idea that we need to be cooking everything from scratch with a laundry list of ingredients, and planning out all of our meals for weeks in advance is totally B.S.

But at the same time, I don’t recommend winging it.   Alas, when cooking and keeping things easy/simple, it’s all about getting creative and working with what you have on hand…

This French toast came out rich, sweet, savory, buttery and delightful.  The textures were on point too!

In my experience, the key to really fantastic, 5-star gluten free French toast is to make sure you find a high quality bread.  Since gluten is what makes bread soft and doughy, most gluten free bread options are dry and crumbly compared to their “gluten-ous” counterparts.

Udi’s gluten free bread (plain or cinnamon raisin) is a great option from a taste and texture standpoint, in my experience.  It’s available in most supermarkets.  Going to a health food store or online, you may be able to find Outside the Bread Box gluten free oat bread which was actually recommended to me by a few clients!

The best gluten free bread I’ve ever had is by a local Texas vendor called Gluten Free Yourself (“GFY”).  In Massachusetts, I love “Something Sweet without Wheat” too!

(Please note this recipe doesn’t have to be gluten free!  If you aren’t on a gluten free diet, I recommend trying Dave’s Killer bread or Ezekiel bread which are both in alignment with my values from a health perspective as well as environmentally.)

Choosing a butter (or alternative)

For butter, when cooking at home we use Kerrygold butter because of the way they keep their cows happy and healthy.  Butter that come from grass-fed cows is also higher in vitamin-A (you’ll notice the difference in the deeper golden yellow color, which comes from the extra carotenoid pigments!). (1)

You can swap the butter for coconut oil or vegan butter of your choice! I like Earth Balance.

Swap the milk for a milk substitute like almond milk, coconut milk or rice milk.

What kind of apples?

It really doesn’t matter too much what kinds of apples you use.  We happened to have a dozen organic Gala apples on-hand and it felt like gluten free apple cinnamon French toast would be an innovative way to use some up!

This one usually goes without saying, but if possible I recommend using real maple syrup (the stuff that comes out of maple trees) versus a corn syrup based alternative like Mrs. Butterworths’ or Aunt Jemima.

I understand there’s something to be said about “all foods fit” and moderation.  Honestly it’s your prerogative, but I believe this makes a big difference not just in the quality of how the French toast turns out (yup, I’m a food snob)… but also in your health!

(We talk more about this in-depth in week 5 of my Kitchen Alchemy Food Fundamentals e-course.)

Why cinnamon?  Well, because it’s warming, tasty and timeless!  It goes so perfectly with cooked apples.  An added perk of using cinnamon is that it helps to keep blood sugar levels balanced, especially in a meal like French toast which is higher in carbs! (2)

But if you don’t have any on hand, that’s totally fine.  You can also experiment with nutmeg, cloves, apple pie spice or even pumpkin pie spice if you’re feeling extra daring…

Tried this recipe?Let us know how it was!

3 thoughts on “Gluten Free French Toast with Apples and Cinnamon”

Healing your gut? Learn how and why to avoid the top 5 common gut health dietary pitfalls I see so many people making. Download your free gut health nutrition guide here!
Read more

We use cookies on our website to give you the most relevant experience by remembering your preferences and repeat visits. By clicking “Accept All”, you consent to the use of ALL the cookies. However, you may visit "Cookie Settings" to provide a controlled consent.
Cookie SettingsReject AllAccept All
Manage consent

This website uses cookies to improve your experience while you navigate through the website. Out of these, the cookies that are categorized as necessary are stored on your browser as they are essential for the working of basic functionalities of the website. We also use third-party cookies that help us analyze and understand how you use this website. These cookies will be stored in your browser only with your consent. You also have the option to opt-out of these cookies. But opting out of some of these cookies may affect your browsing experience.
Necessary Always Enabled
Necessary cookies are absolutely essential for the website to function properly. These cookies ensure basic functionalities and security features of the website, anonymously.
Functional
Functional cookies help to perform certain functionalities like sharing the content of the website on social media platforms, collect feedbacks, and other third-party features.
Performance
Performance cookies are used to understand and analyze the key performance indexes of the website which helps in delivering a better user experience for the visitors.
Analytics
Analytical cookies are used to understand how visitors interact with the website. These cookies help provide information on metrics the number of visitors, bounce rate, traffic source, etc.
Advertisement
Advertisement cookies are used to provide visitors with relevant ads and marketing campaigns. These cookies track visitors across websites and collect information to provide customized ads.
Others
Other uncategorized cookies are those that are being analyzed and have not been classified into a category as yet.
SAVE & ACCEPT