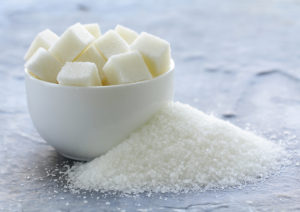 Splenda®, or sucralose, is a well-known FDA-approved artificial sweetener which made its way into the market back in the late 1990’s.  Along with its counterparts including saccharin, aspartame (now labeled as “amino sweet”), and a handful of other artificial sweeteners, Splenda® has been hit with a lot of controversy.

Is sucralose good or bad?

Unfortunately in the world of health, not everything is black and white, right or wrong.  Health professionals of all kinds don’t always see eye-to-eye across the board when it comes to what we’re putting (or not putting) in our bodies, because research findings can be easily skewed, inconsistent, and/or misleading.

The chemical structure of sucralose is nearly identical to that of table sugar (sucrose).  The only chemical difference between the two molecules  is three chlorine atoms (1, 2).

Sucralose is categorized as a C3 chlorocarbon, because three hydrogen atoms from the original molecule (table sugar) have been replaced with three chlorine atoms (3).  Other examples of chlorocarbons include chloromethane, trichloromethane, and trichloroethylene which are frequently used in a variety of cleaning and de-greasing products (3, 4).

The sensory impact of that one chemical change is a substance that our taste buds perceive to be 600x sweeter than regular table sugar (1, 2).  However, since Splenda® can’t convert to glucose (blood sugar), this also means it doesn’t get broken down and metabolized into energy (2).

Many people, especially those with diabetes, choose to use artificial sweeteners in place of regular sugar, with the intention to have better controlled blood sugar levels.

However, as stated by the International Food Information Council Foundation:

“According to the American Diabetes Association (ADA) and American Heart Association (AHA) 2013 joint scientific statement, four randomized control trials (the gold standard in scientific research) found no significant difference in the effects of low-calorie sweeteners on standard measures of glycemic response compared to other sweeteners” (2).

Does Splenda® make its way into our blood?

This depends on who you talk to, I suppose…

According to the International Food Information Council Foundation, sucralose is “poorly absorbed” and they even go so far as to say that Splenda® gets excreted unchanged from the body (2).

There are many published studies promoting the use of Splenda® and other artificial sweeteners for their proven effects on weight loss.  For example, a 2013 study found that people who drink two diet beverages instead of two sugar-sweetened drinks every day enjoyed a “healthy change in their overall food preferences and calorie intake” (2).

However, you might want to consider these additional studies on sucralose which do not get as much public attention:

Some additional points to consider:

Healing your gut? Learn how and why to avoid the top 5 common gut health dietary pitfalls I see so many people making. Download your free gut health nutrition guide here!
Read more

We use cookies on our website to give you the most relevant experience by remembering your preferences and repeat visits. By clicking “Accept All”, you consent to the use of ALL the cookies. However, you may visit "Cookie Settings" to provide a controlled consent.
Cookie SettingsReject AllAccept All
Manage consent

This website uses cookies to improve your experience while you navigate through the website. Out of these, the cookies that are categorized as necessary are stored on your browser as they are essential for the working of basic functionalities of the website. We also use third-party cookies that help us analyze and understand how you use this website. These cookies will be stored in your browser only with your consent. You also have the option to opt-out of these cookies. But opting out of some of these cookies may affect your browsing experience.
Necessary Always Enabled
Necessary cookies are absolutely essential for the website to function properly. These cookies ensure basic functionalities and security features of the website, anonymously.
Functional
Functional cookies help to perform certain functionalities like sharing the content of the website on social media platforms, collect feedbacks, and other third-party features.
Performance
Performance cookies are used to understand and analyze the key performance indexes of the website which helps in delivering a better user experience for the visitors.
Analytics
Analytical cookies are used to understand how visitors interact with the website. These cookies help provide information on metrics the number of visitors, bounce rate, traffic source, etc.
Advertisement
Advertisement cookies are used to provide visitors with relevant ads and marketing campaigns. These cookies track visitors across websites and collect information to provide customized ads.
Others
Other uncategorized cookies are those that are being analyzed and have not been classified into a category as yet.
SAVE & ACCEPT